Amazing and at the same time, a strange story was told to me by an old acquaintance by correspondence. He told me of the time when he was nothing but a simple guy, yearning for a young female flesh. But due to the thunderstorm of events, in which he was cast, he found himself at a disastrous end. His birth was shrouded in mystery, and his goals were that of a simple man. His youth could be the envy of all. But to live through his destiny and bear the entirety of it, is even beyond my power. He will recite you a tale about the students who changed his life. And many women who he met, and how they have changed his fate.We are about to take an endeavor into a magical world, that has not seen a wild debauchery since the fall of the Bewitching Guild. The old magical school, that above all valued purity and chastity.And we also hear about a young doctor, who grew tired of old witches, and who dreamed of young and innocent witches… Many familiar characters will meet us there; some of them will take on roles you would have never expected to see them in. Child’s tale transform into the one for an adult. You have never seen them like this. What was hidden or held back from the inquisitive, but naïve child’s mind, will be revealed with most obscene details. A reasonable approach to the source, coupled with deliberate revisions helped us to create a truly interesting interpretation of the wizarding saga. It will not repeat the original and will not try to tell the same stories of your beloved characters. 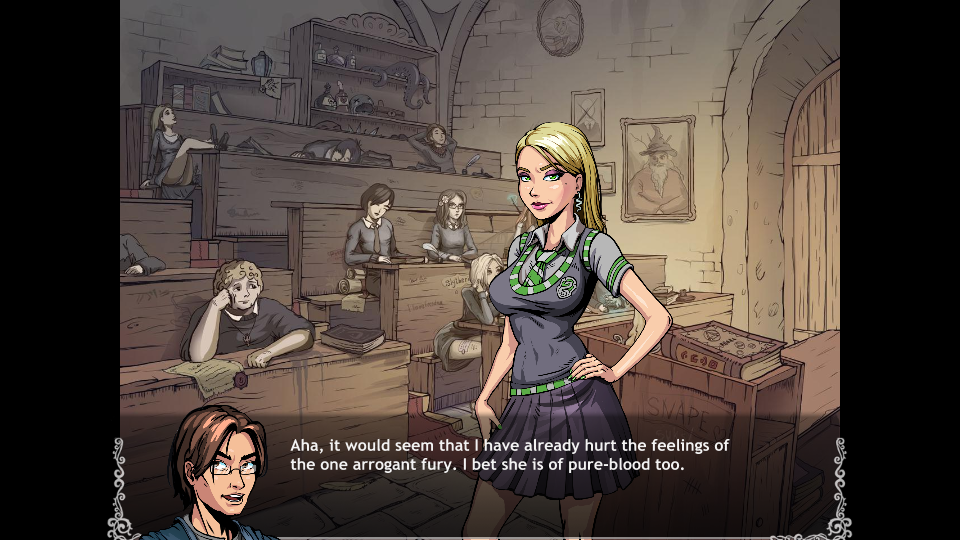 This is a completely new view of the universe, in which the fate of many is rewritten, and the main role is taken by a character, whose appearance was destined from our assumptions. His name – Salazar Riddle Black. He is to meet many and be acquainted with many heroes of the original saga, at the same time re-introducing them to us. Girls will be exactly who we would like them to be – realizing that they are real girls. And the guys will only help us, by showing their attraction to their femininity.

It is time to raise our sails! Onwards to Hogwarts!

Note: our first release version will include some of arts and mechanics from the “Witch Trainer” made by Akabur. It is temporary solution and soon after the first release will come almost 100% of his arts will be completely replaced by the new one. Also you will have an ability to play our previous mode “Witch trainer 1.6 RE” (and older) that will contain all original arts and storyline with our additions and extensions. “Witch Trainer RE” will be always avaliable inside our “Innocent Witches” game and will not be continued after the 1.6-version.

This game is currently in progress!

Liked it? Take a second to support JoeBanks on Patreon!